Reports have emerged identifying Atlanta United ace Miguel Almiron with a move to Premier League outfit, Newcastle United. The player is said to be at the top of Rafa Benitez’s wishlist for the January transfer window. 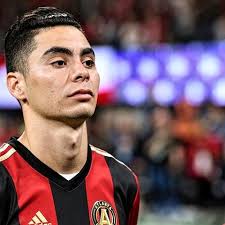 Miguel Almiron, who currently plays in the MLS, is said to be Newcastle’s main transfer target ahead of the winter transfer window, according to The Chronicle but the club have also lined up two other Europe-based players as possible alternatives.

They may be forced to break their record transfer fee to be able to lure the Atlanta United midfielder to the Tyneside.


After a disappointing summer transfer window which saw the club fail to bring in any new players, fans will be delighted to see their club finally linked with a move for a player but they may not have heard a lot about the Paraguayan.

Miguel Angel Almiron is a Paraguayan professional footballer who currently plays as an attacking midfielder for Atlanta United in MLS and the Paraguay national team. He arrived at Atlanta in 2016 and has made a total of 62 appearances, scoring 21 goals. He has also won 12 caps for Paraguay but is yet to score a goal.

The Chronicles reports that Newcastle are still yet to make a bid for the attacking midfielder, who valued at around $20 million, but continues discussions with the MLS club over a potential transfer deal.

A source of concern for Newcastle fans though is that there have also been reports linking the club with two other players as alternatives in the event that they cannot pull off a deal for Almiron and if either is eventually brought in, it appears Michael Owen will remain the club’s most expensive signing for the time being.

After so much buzz around the club about breaking the club’s transfer record, fans will be left fuming if they end up not signing Almiron for a record fee.